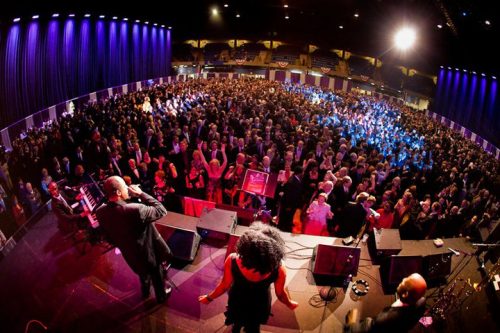 The Who?
The Chicago Catz are one of the Windy City’s best kept secrets and treasures. For more than 30 years, this group of professional musicians have performed at some of the most prestigious private parties and events in Chicago. “High society hors d’oeuvre music”, you’re thinking. To the contrary, The Chicago Catz serve up and dish out the hottest “get out of your seat and dance” music in town!

The Why:
During the late 70’s and early 80’s there were three hugely successful local bands in Chicago: R&B group Third Rail (later known as Maxx Traxx), Ska band Heavy Manners, and blues act Big Twist and the Mellow Fellows. Each band sold out night clubs, played college concerts and put out albums of original music. By day, the musicians were respected studio/session players. Jingle houses and album producers were always putting out the call for “those cats from Chicago”. The stress from the “let’s make records” grind and the competition from session work was enormous. Several of the guys from the three groups were longtime friends and had similar musical tastes, having grown up listening to R&B pop music. They thought that it would be fun to put together a high energy R&B pop dance band as a side project. It would create a nice change of pace from their daily business pressures and give them the opportunity to play together. Through their contacts, they knew they could pick up some club dates and “let their hair down” playing songs made famous by the likes of Stevie Wonder, James Brown, Temptations and other greats of the Motown era.

Their plan was put into action. They got together after their sessions and rehearsed for several months until the music was tight. During this time, word got out that the supergroup had formed. At their first appearance, devoted fans of “Third Rail/Maxx Traxx, Heavy Manners and Big Twist & The Mellow Fellows came out in droves to see them. The fireworks emanating from on stage fueled the audience and the group became an instant success, The “Catz” as they are called by their fans, have gone on to become one of the most sought after groups for corporate, private and special events. They still play occasional club dates at the urging of their friends and fans and always leave the crowd sweating and yelling for more. Their musicianship is arguably the best in Chicago and their philosophy is simple. “We’re here to have fun, you might as well join us”.

The Chicago Catz have demonstrated to event planners that a “fun and party” atmosphere does not have to be sacrificed for fear of having a bunch of grungy, mediocre, part-time musicians show up as the evenings entertainment. They have proven there is a choice, other than dancing to the “Sleepy Time Orchestra”, for your event.

You’ve got nothing to lose, except a good time!